The true story of how a seal named Andre befriended a little girl and her family, circa 1962. Toni Whitney and her family adopt a baby sea lion. When it grows and starts getting into mischief, it antagonizes some of the fisherman in the town. One of the fisherman, Billy Baker, is upset with the Whitney's because Toni's father, Harry, was appointed Harbor Master instead of him, partially because of the seal. But when the humorous antics of the sea lion attracts media attention, further squeezing out Mark, and running down his business, he gets even more upset. Everybody Loves Alice - A dramatic love story of a man, two women and three children. When love suddenly explodes in these people's lives it creates a pressure wave that changes the lives of everyone. Johan is married with Lotta and has two children, when Johan and his colleague Anna falls in love with one another. A love that causes anger, hate, joy and eventually new possibilities. 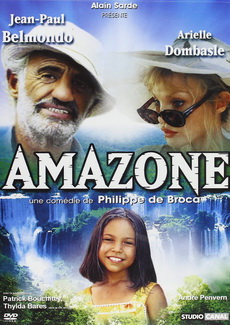 The hoped for peaceful life of a retired man living quietly in a jungle village is shaken when an eight year old alien from Mars falls in his midst. On an observatory set high on a mountain, astronomers make a stunning discovery somewhere out in the galaxy. A flying object in the depths of the cosmos is showing signs of life, emitting an intelligent signal. The UFO has just landed on Earth somewhere in the midst of a rainforest. Margot, the enthusiastic young woman heading up the research team, decides to go to the spot and check out this phenomenon. Meanwhile Edouard, our hero, studies the flora and fauna of the tree tops in the rainforest. He perches on an enormous net that stretches over the still pure, unadulterated forest that spreads out beneath him. He discovers a naked little twelve-year old girl seated on the net. He covers her with a broad banana leaf and asks where she comes from. She quickly replies, in perfect French 'from another world'. Also Known As (AKA): Lulu, Amazon, Amazonka. (English subtitles - automatic translation - there are errors)