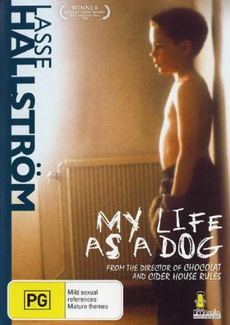 The film follows the life of Ingemar in his 12th year as he has to cope with the slow death of his mother. The film takes place in 1959 in Sweden, and is just right in its atmosphere. Hallestrom works wonders with Anton Glanzelius as Ingemar, and he gives a marvelous performance that is truly touching and real. When his mother can no longer care for him and his older brother, Ingemar is sent off to his Uncle who lives in a small town in which it seems that all the residents work at the glass factory, and he soon becomes part of the town's fabric. His adventures are many,and includes his learning to box from the town tomboy who worries about her budding breasts, the chaperoning of the lovely town beauty as she poses nude for a sculptor, and his reading of a lingerie catalog to a dying old man. The film has been accused at least by someone on this list as being pornographic and prurient which is idiotic and stupid. This is a film about childhood and like most childhoods the film includes several scenes about children's growing awareness and curiosity about sex and their bodies and presents it in a real and sensitive way.