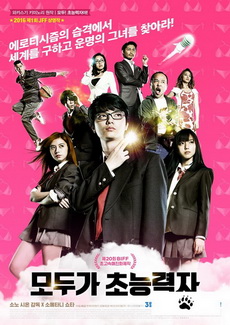 After receiving a cosmic blast while masturbating, a virginal teenager gains psychic powers and joins a group of ESP virgins in order to defend the world from evil psychics. I am psychic! You are psychic! Everyone is psychic... but still virgin! Full of laughs and through the eyes of a virgin teenager who wishes to become a hero by saving the world with his suddenly acquired psychic power. Based on the comic "Minna! Esper Dayo!" by Kiminori Wakasugi. A high-school student Yoshiro has never got a spotlight in his life and spends his days aimlessly. What only shines in his life is a girl Sae at his school. Even if being completely disregarded by her, he still dreams of becoming her true love in the future. One day, he finds himself having a mind-reading psychic power. As he looks around, there seem more psychics born in the city, and somehow they are all virgins! One uses his psychokinetic power to fulfill his sexual desire or turns into a flasher using teleportation ability... On the arrival of the psychics like Yoshiro, the city gets gradually infested with the erotic terrorism evoked by a mysterious group. Knowing he has never got any attention from the girl of his dreams, Yoshiro determines to use his power to save the world from this steamy chaos and show off what he has got to the love of his life!